The only thing that’s more of a I’m-going-to-TRY-to-make-that-happen-but-it-probably-won’t is a “resolution” I’ve made a few times: to blog more. I love going back and reading my almost daily posts from livejournal when I was in college. I’d love to just jot more things down for my own memories down the road.

My literary new year was actually December 25th. Last year I got an ereader for Christmas and plowed through two or three books at my folks’ house and on the plane home. I set a goal to read 25 books before Christmas 2011, and I finished up my 25th book with a few days to spare. (I didn’t finish the Steve Jobs biography, but it’s on my night stand and will count for 2012.) Shamelessly ripping off these two lovely recaps of the year.

A Visit from the Goon Squad (boring)

This is Where I Leave You

Better Off: Flipping the Switch on Technology

Confessions of a Tax Collector: One Man’s Tour of Duty Inside the IRS

Going Gray : What I Learned About Beauty, Sex, Work, Motherhood

Might have enjoyed it more if it was less hyped:

Hotel on the Corner of Bitter and Sweet

Fiction I can do, but fantasy sometimes makes me wary:

The Particular Sadness of Lemon Cake

The Art of Racing in the Rain

Does this even count as reading?

Cutting for Stone (Too gross)

Being Wrong: Adventures in the Margin of Error (Too boring)

Same goal for 2012! I thought about upping it, but I don’t want to just be reading for the sake of a notch on my book belt.

This month my favorite part of the day has been checking the mail and then opening Christmas cards! And holiday cards, I guess, since so few of them actually say Merry Christmas anymore.

(Ours do not say “Christmas” on them in the pre-printed part. I write Merry Christmas on all of them except for one which goes to my Jewish friend who I know gets frustrated at the pervasiveness of Christmas. I’ve actually known this gal since, like, high school. Maybe she doesn’t even care anymore, but I still do it that way just for you, Alana!)

Since we moved into this house in 2009, one of my favorite random things has been getting Christmas cards intended for the gal who lived here before us. We normally get two or three. And I do not care, they still go up on the refrigerator.

One we always get is from someone who obviously knows her family pretty well, but obviously not her since she keeps sending cards to the wrong address. It always has a long handwritten note that says something like, “I’m so glad your dad’s surgery went well this summer!” and things like that.

The other one we always get is from a family that is a bit of a puzzle. On one hand, they live in the deep suburbs of Denver. Just googled some demographic info on their ‘hood: 92% white, median family income $110k, about 70% of households are married couples (with or without kids). So, I’m just saying. This is a place made up of families who are, in general, terrified of people who live in my neighborhood.

But! The dad is has tons of tattoos, and the kids are named Jagger and Venice. The mom is like super hot, clearly a creative type. They send out these cards with beautiful professional photos, and they’re just a funky, adorable, interesting family.

We got their card in today’s mail. This year, though, something was missing. Their card only featured three people: Mom and kiddos. No dad! WHAT?

“OMG they got DIVORCED” I cried, feeling way more interested than I was by any couple on US Weekly this year, “Or what if he died?!”

Some lengthy googling and facebooking confirmed that my initial suspicions were correct. He’s still alive, so I’m assuming they got divorced. Which is so sad, because they looked so happy in last year’s photos! Which, I will point out, even included a close up photo of their hands clasped, on the beach, his wedding band prominently featured.

What went wrong? They seemed so happy? Whhhy?

If you have seen me at any point in the past three weeks, odds are I was wearing these boots.

I justified the leather (and the cost) based on the reputation of Frye boots as lasting forever. Like, hand them down to your granddaughter forever. So, rather than spending $40 on a new pair of “man-mad materials” every year, I figure this is the last pair of boots I’m allowed to buy until I’m forty (seriously).

Plus, they’re called Melissa Button Boots. My name is Mel(issa) and I have an ardent love for buttons. Meant to friggin’ be.

I really would like to be a person who runs outside regularly, but beautiful weather combined with icy sidewalks make it hard, and make me mad. When I have to run or walk on sidewalks like this, I compose notes to my neighbors. I try to come up with polite, clever, nice-but-reprimanding ways to encourage them to shovel their sidewalks so that when the snow melts, it doesn’t refreeze into death ice. Because it’s the law, it’s polite, it is good for my safety, it makes you a nice person.

I’ve spent a lot of time considering it.  I commuted on foot for all of the winter of 2009-2010 and didn’t really come up with anything. Might just be easier to call the city and report them. 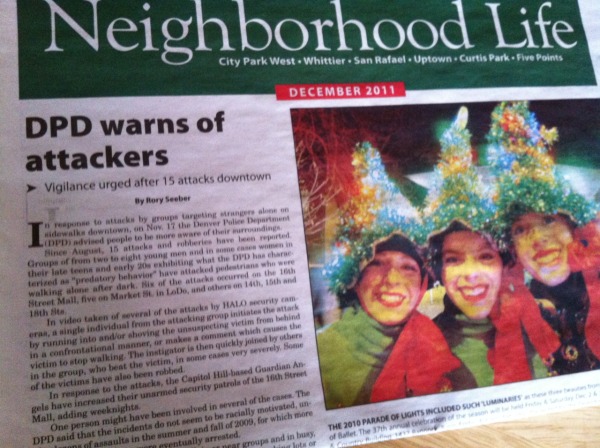